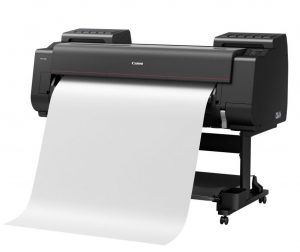 The PRO-4000 uses a Sub Ink Tank mechanism to extract every last drop of printer ink from your cartridges while also allowing for smooth cartridge swaps even when printing. The Multifunction Roll System included with this model allows for two rolls to be linked simultaneously for quick switching between different media or to be utilized as a take-up reel with bi-directional rewinding, enhancing the unit’s capabilities.

A big 3.5″ color LCD touchscreen is provided for operation, and a directly accessible USB connector allows printing from a flash drive. This printer also supports Ethernet and Wi-Fi connectivity for wired and wireless networking, as well as USB 2.0 for a quick connection to a computer. This set will produce bright images with crisp details, greater gloss consistency, improved scratch resistance, greater reproduction of dark areas, and decreased graininess, thanks to a twelve-color pigment-based ink system and a Chroma Optimizer.

Fast, precise printing is enabled with a PF-10 1.28″ wide print head with 18,432 nozzles and anti-clogging FINE technology, which is verified by 27 separate sensors. This system uses 12 channels with twelve colors for increased performance, resulting in rapid print speeds and no ink switching when dealing with both matte and glossy surfaces. The print head is also wider than in previous generations, allowing the printer to use only one print head and be more compact. The Sub-Ink Tank System allows users to squeeze every last drop of ink from the tank before replacing it, as well as cartridge swaps in the middle of a task. Large-capacity cartridges from the PFI-1100, PFI-1300, and PFI-1700 series, with capacities of 160mL, 330mL, and 700mL, respectively, are also compatible with the PRO-4000.