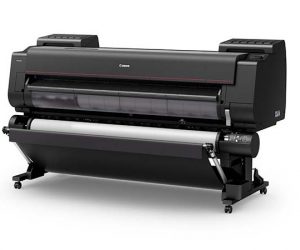 The bundled Device Management console software can calibrate and monitor up to 50 PRO series printers, and the built-in Multi-sensor maintains colour consistency from one print to the next. The imagePRORGAF Pro-6100 delivers intelligent media loading for media handling. Setting the roller holder on the printer will automatically feed the media into the printer, and the unit’s multi-roll mechanism allows the loading of two paper rolls at the same time, allowing it to go from matte to glossy paper without stopping the operation.

To determine the type of media, the built-in multi-sensor detects surface reflection and medium thickness. A sub-ink tank technology removes all of the ink in the tank before it needs to be replaced. Reducing waste and allowing the printer to continue printing while the tank is being replaced. Furthermore, because black ink and photo-Black each have their own specialized nozzles. there is no need to switch between them when printing on different types of media, such as glossy paper and Fine-Art.

A 4.3-inch colour LCD touchscreen mimics the usefulness of a smartphone, and the three most often used commands (load, feed, and cut) each have their own buttons under the Operation panel for quick and easy access. A built-in USB port enables direct printing of PDF and JPEG files without the use of a computer, and a 500GB hard drive boosts productivity by decreasing the workload of a MAC or PC host.